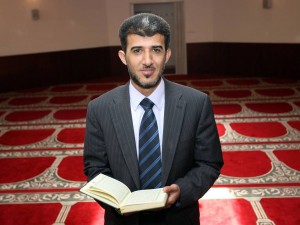 An atheist association in the Czech Republic (OSACR) filed a legal complaint against the formal head of Czech Muslims – Muneeb Hassan Alrawi. The complaint centres on his potential illegal conduct in a sermon where he calls on Muslims to teach their children to hate “kufr” (usually translated as all things unacceptable and offensive to God and defined in Qur’an by acts of  „unbelievers“, „disbelievers“, or „infidels”) and to beat them if they refuse to pray*. Such preaching is especially peculiar in a country which is often ranked as one of the least religious in the world and where Muslims represent a tiny fraction of the population.

Yes, it is not surprising from radical clerics, but Mr. Alrawi is chairman of the “Center of Muslim Communities” in the Czech Republic (UMO) making him formally the highest representative of Muslims in the country. Next year UMO plans to acquire a higher legal status that would allow them – among other advantages – to teach their version of Islam in schools, prisons etc.

Nevertheless, what makes this case perhaps unique is the response of the state attorney J. Petrásek. He stated in the newspaper Rovnost that the case is “interesting and unique, and if accepted it would probably be classified as a threat to the moral education of youth and Mr. Alrawi would be immediately prosecuted”. Furthermore Mr. Petrasek said that “to outlaw the entire Islamic association is bold, but not unrealistic” which sounds reasonable in light of Mr. Alrawi’s response that he had read a translated sermon and that the content of his teaching is an integral part of Islam.

OSACR said: “We regard it unacceptable that the state grants a registration to a group whose leaders regularly call to hate unbelievers”. “Our association cares about advancement of humanism, secular values, tolerance and understanding. However, we see a direct threat to these values in extremist organisations like UMO.“

“Your duty in this period is to teach him (a child between 7 and 10) to love Islam, and – that he could become a Muslim – teach him to express hate towards kufr. Teach him hate towards everything immoral and not good. Mainly, teach him to hate kufr, hence not-accepting Allah.”

“Teach your children salah (prayer) at age 7 and you can beat them when they are 10 if they don’t do so.”

15 thoughts on “Czech attorney: “To outlaw the entire Islamic association is bold, but not unrealistic””