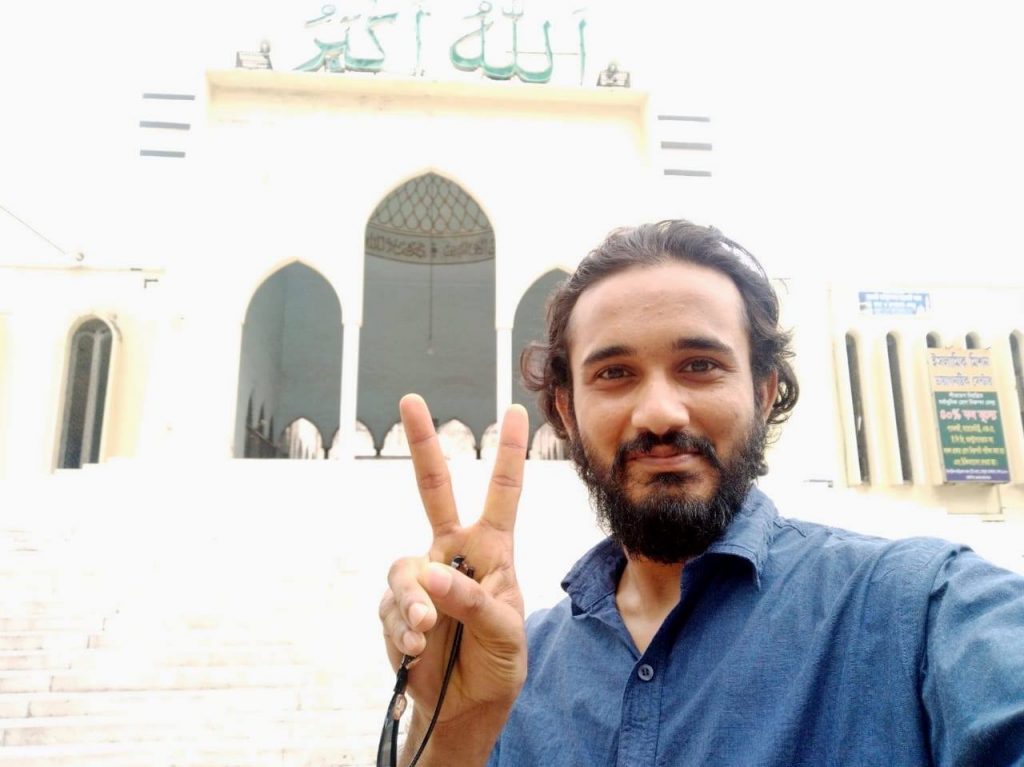 Hello Asad, can you describe yorself and your activities in a few sentences? Who is Asad Noor?

I was a madrasa student in my childhood and I was tortured mentally and physically by the teachers and preachers of this islamic institution. I started making videos and blogs back in 2016, when I was 24 years old. At that time, group of young people started dreaming of a secular Bangladesh. Then fundamentalists started doing their processions against us and one islamic preacher lodged a case against me and I got arrested due to the Bangladeshi blasphemy law. Long 9 months (since december 2017) I was in custody and finally I got bail on 8th August 2018. After that, islamic organisation Hefazat-e-Islam Bangladesh again did a long procession aganst my bail and they demanded death penalty for me. December 2018 was our voting time, so again Special service arrested me and government tried to cancel my high court bail through appellate division and supreme court. In february 2019, after another 5 months in jail, I got a bail but they did not give me back my pasport and one of my electronic devices. This is Asad Noor, fighting against a whole country only because I spoke truth about islam.

Correct me if I am wrong, you were in prison because you „insulted islam“ and „religious feelings of muslims“ in your articles on your blog. What exactly „defective“ and „unlawful“ did you write and what was the charge?

I only have tried to aware people. My intention was never to intentionally hurt someone’s feelings. I just wrote about islam, about islamic jihad. I made videos about how muslims tortured Hindus and other religious minorities in my country. Then fundamentalists came to my house to burn my house. My parents left me forever because my criticism of islam. I lost everything in my life. My family, my job, my livelihood. That was my fault and I was charged under Bangladeshi blasphemy law for insulting islam. But i did not insult islam. I only spoke truth about the holy book „Quran“, which I read thoroughly and I know that who religiously follow Quran will kill other, „different“ people. It is clearly mentioned in Quran.

You told me that you want to leave Bangladesh, but government have seized your passport. So what are your options right now?

I gave a petition to the court and I hope that they give me my passport back. My barristers are trying hard to get it back. I stood in the court for the three times but judge did not give any conclusion yet. I have been asked to wait more and I am waiting.

From my point of view, Bangladesh looks like one of the most dangerous places on Earth for atheists and secularists. A lot of secularists and atheists were killed during the last years. Last year it was Shahzahan Bachchu, and before that, for example, Rezaul Karim Siddique, Nazimudin Samad, Ananta Bijoy Das, Avijit Roy and many others. Many other secularists survived these attacks, but were injured. What is your explanation for this negative phenomena in Bangladesh?

Yes, Bangladesh became a dangerous place for atheists and secularists. Muslims tried to kill me several times but I do not stay in a particular place for a long time. I do not go to a specific place regularly otherwise I would have got killed. For this negative phenomena I only find one reason: Quran.

How do ordinary people from Bangladesh look on atheism and atheists? Is there some widespread hostility against atheists, or it is a case of a few extremists? I saw a lot of hate posts on your facebook page, and people who wrote these comments looks like an ordinary people to me…

Ordinary people are all muslims. Mostly they are muslims. They hate secular people. They can kill an atheist to get to heaven after death. There are many mosques in Bangladesh where fundamentalists give training to ordinary people. They even supply weapons. They all carry sword with them and openly announce that they will kill atheists for the sake of heaven as this is the order from Allah ordered by Muhammad.

How hard it is to be an atheist in Bangladesh? I tis common that atheists must keep their unbelieve in secret, because they are afraid of reactions of their family, colleagues in work and friends?

Absolutely. Atheists in Bangladesh are not allowed to talk openly. Muslims can kill their family, friends and colleagues any time. I opened my mouth. So they were about to burn my village house. My family can not buy anything from local grocery shops because I was a part of my family. And my parents gave birth to me so they are the worst creatures on Earth in the eyes of muslims and islam. Last time when they arrested me they took four more people along with me. Three of them were just students and one of them is my girlfriend Beas Basu, and she is an Indian citizen. Without any search warrant they destroyed the place where I lived for a few days and without any arrest warrant they took us and kept in the prison because I was about to leave my country within an hour. They hate me so much for my disbelief in religion and out of the grudge they arrested everyone who were associated with me that very moment.

They treated me very badly. All prisoners has to carry their case card everywhere in jail. And in my case card, there was written „Blogger“. And blogger is worse than a murderer, a rapist or a top terrorist. I was beaten badly by other prisoners once. And they wrapped my face with a blanket and beaten me mercilessly. I could not recognize them after that. And they used to insult me everywhere because I never practised fasting and prayers.

That sounds really terrible. And what about prison guards? I suppose that they treat you similarly?

How large is Bangladeshi secular & atheist scene? Are you in contact with some other secular activists in Bangladesh, and if so, could you introdukce some of them to us?

About 90 % of population is Muslim, but I hope that there could be about 1 % of secularists in Bangladesh. I know few of them who already left Bangladesh due to death threats: Abdullah Al Masud, Sazzadul Haque Aupon and Arifur Rahman.

How did you become seularist and atheist, what and when led you away from religion?

I was a science student and I knew the truth about islam from my childhood. I used to play on guitar and I was good in drawing but all these good things are not allowed in islam so my family destroyed guitars and did not allow me to draw pictures. I even could not play with toys in my childhood because toys too are not allowed in islam. These are all the basic reasons why I came far far away from religion. I lost my job, I had to leave the city.

How would you describe your relation to religion in general?

My relation to religion is not to hurt anyone’s feelings. But I will speak the truth about the dark side of the religion as long as I am alive.

Do you think that all religions are equally dangerous or bad, or that some religion(s) are worse then others?

I find only islam is the worst religion on Earth. Other religions do not murder people for the sake of religion in this century as I know.

And how do you see the future of Bangladesh, do you think that secularism has a chance in your country?

Since I am a dreamer I always hope and believe that obviously secularism has a great chance in my country. My parents and family are hardcore religious and I became secular long time back, when I was just a student. Many like minded people are coming forward and educating themselves. Maybe they are not large in numbers but someday these new generations will make a good impact in our society and they will establish secularism.

Czech version of this interview is here.

2 thoughts on “Islam is the worst religion, says Bangladeshi atheist Asad Noor in an interview for Atheist Czech Republic”